Lions District 202J welcomes you to our district webpage

District 202J covers much of the east coast of New Zealand’s South Island from Rakaia to Milton, and inland from Middlemarch up through Otematata and Tekapo to Geraldine. The district covers the flat plains of Mid-Canterbury and South Canterbury, the rolling hills of North Otago, and tussock and native bush covered hills behind Dunedin and beyond.  Rivers like the Taieri, Waitaki, Rangitata and the Rakaia, and our many lakes make our district great for freshwater anglers.  Saltwater fishing is also rewarding with many varieties caught including blue cod and groper.

Ashburton is a busy farming supply town surrounded by lush plains that support many different types of farming.  Extensive irrigation schemes allow full utilisation of the land.  Sheep, cattle, and deer are farmed in conjunction with numerous varieties of crops, both vegetable, seeds and grain.

Timaru is built around a thriving port that services the South Canterbury farmlands.  With the rerouting of S.H. 1, Timaru is again a quiet peaceful town.

Oamaru is famous for its Victorian look and feel.  Walking down Harbour Street is like stepping back into the 19th century.  Be careful not to get run over by a penny-farthing cycle!

Dunedin is the main city in our district. The “Edinburgh of the South” lives up to its name with a statue of Robbie Burns in the Octagon at its centre.  Dunedin is a university city with over 18000 students.  Even though Dunedin has a population of approximately 125,000, it is New Zealand’s largest city by area, stretching from Middlemarch on the Strath Taieri plain in the west to Waikouaiti on the east coast and Mosgiel south-west of Dunedin, and including Otago Peninsula.  Other attractions in Dunedin are the historic Edwardian-era railway station, the albatross colony on the northern tip of the peninsula at Taiaroa Head, Larnach Castle, Olverston, the University of Otago buildings, Speight’s Brewery, and the new roofed Forsyth Barr Stadium. 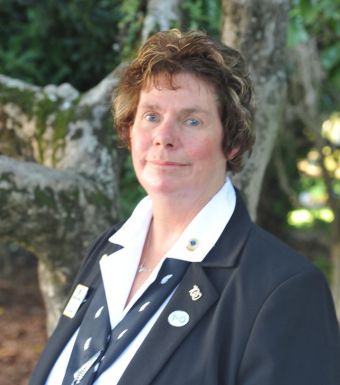 Theme: “Together We are a Team”

I have lived all my life in and around Ashburton. My early years were spent in Chertsey, attending the Chertsey Primary school, then on to Ashburton College.

After leaving school I worked at the local power authority for 11 years. 41 years ago I married my husband Kevin. We have three children, and 2 grandchildren.

Kevin and I have been involved in the local business scene for most of our married life, owning and operating 4 small businesses over the years.  I now work part time at Chertsey Primary school as their office administrator.

T: Together
E: Everyone
A: Achieves
M: More

It is my belief that unless we work as a team, we will not achieve what we want to do in life, and in particular our Lions Service. Clubs must work together as a team to achieve their community service goals, and our District team must work with our clubs to grow the District, to show the leadership, guidance and succession planning that our District needs to continue to thrive.

I look forward to leading District J through the next 12 months.